Mark Boner, Jr. – Mark has been playing the Drums since he was 5 years old, but has been around music all his life.  His Dad, drummer for local band “Krystal Klear”, taught him everything he knows about playing, and is Mark’s biggest influence.  Other drummers that have shaped his playing style include, but are not limited to; Neil Peart, John Bonham, and Buddy Rich.  He has been privileged to be surrounded by great musicians his whole life, all of which helped make him who he is today.  As a teenager, Mark played at the Baltimore Inner Harbor, Rash Field in Baltimore, Oriole Park Camden Yards, The Towson Festival, The Hamilton Festival, and local area night clubs.  He was asked to play with High Voltage and was thrilled with the opportunity.  In fact, Mark, Sr. played with Greg Kuta and Mike Davis in the 80’s – and now Mark Jr. is playing with them in 2010!  And, someone needs to bring some youth to the group!!  Music is all about having fun and enjoying yourself, and he does not ever see himself stopping. 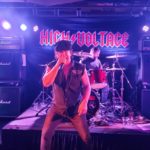 Don Shoener – Don is one of the fabulous Lead vocalists for the band.  A professional front man and accomplished vocalist, he carries a swagger and commands an on-stage presence that is truly remarkable.  “Unless you are a singer, no one can ever really understand the feeling of hearing your voice blast through a microphone at high volume”.  “There is no place on earth that I am more comfortable than on a stage with a mic in my hand and a couple of Marshall stacks at my back…”.  With hundreds of shows and thousands of road miles, you will also find him on international stages with several tribute bands, including of course, High Voltage.  “There is something about singing AC/DC for an hour or two straight…it’s just punching you in the mouth from start to finish…”.

Mike DiMayo – Mike handles the Rhythm Guitar work and shares background vocal duties for High Voltage.  Mike notched 10 years as lead guitarist for Irish band “Rossnareen”, producing two albums, and building a large and dedicated fan base performing at numerous venues, Festivals and other local and regional events.  He has also collaborated with The Big Men for the production and recording of the Red Hot Woman project.  Mike has also performed on Good Morning America and at other Charitable and Special Events, with artists from major bands, including Night Ranger, Bon Jovi, Kiss, The Who, Billy Joel, The Saturday Night Live Band, .38 Special, Ted Nugent, Southside Johnny and The Ramones. 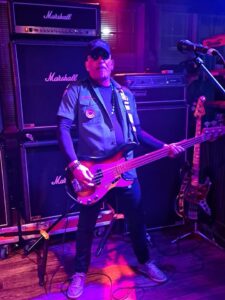 BJ Weigman – BJ has rocked it on bass with a variety of bands, including the hugely successful group Face Dancer.  Anyone who has ever listened to an AC/DC album knows how important it is to maintain a hard-driving style. BJ takes this to heart, and is a perfectionist, taking his job seriously!  He is a true professional and a stud Bass player and consistently delivers  the goods with high-energy and expertise. He bring it on every performance! 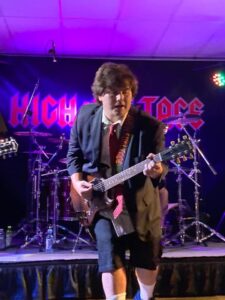 John Hoover – John began playing guitar at a very young age, and is now an exceptional lead guitarist!  John is also a singer and songwriter, and most recently performed with the local group Light Rail Bandits.  John has spent years with High Voltage and he now drives the band with his skillful Lead Guitar work.  When John hits the stage in his traditional Angus Young schoolboy attire, there is no doubt that High Voltage enjoys one of the nation’s most talented AC/DC tribute lead guitarists!